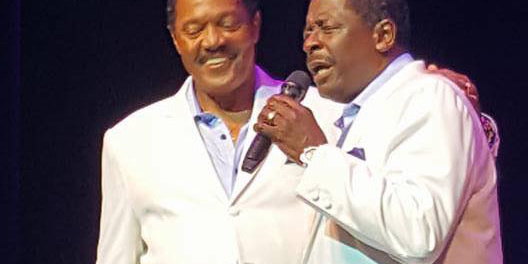 Another soul singer has ventured upward to join that heavenly soul choir on high. Our prayers are with Gerald Alston, Troy May, David Tyson, Justice Butler, Jeffrey Scotty Scott and the entire Manhattans family. Edward “Dwight” Fields of the Legendary R&B Group, The Manhattans will be missed by many who knew him and everyone who was graced by his bright smile and addictive presence.

I had the pleasure of knowing him for almost 25 years and any time I saw him, that welcoming smile of his was there. After the passing of Winfred “Blue” Lovett, Dwight emerged from being by Gerald’s side daily, managing the Manhattans attire and merchandise at events to being up front on stage as a singing member of The Manhattans. If you’ve ever seen him performing with the group, you knew who he was because for some reason that Gospel bug instilled in him from birth would always manage to make its way out during the show. Whether it was that gospel fervor or cutting an extra step or two on stage. Sometimes the fellas would look at him like “What the heck is wrong with him?” LOL. But that was Dwight and one thing for sure he went out doing what he loved to do and that was singing and the best part of it all is he got to do it with his cousin who he loved more than life itself, Gerald Alston. So Dwight, until we meet again on the other side, rest on my brother rest on. ~Maurice “The Voice” Watts